A citizen science project to record butterfly species and numbers

Over 7000 mostly small species of Lycaenidae are found worldwide, with four subfamilies found in Manitoba: harvester (with only one species), coppers, hairstreaks (including elfins) and blues, for a combined total of at least 27 species.  The Lycaenidae are brown, orange, or metallic blue or purple dorsally and often have elegantly patterned ventral wing surfaces.  Several species have tails on the lower hind wing margins and all species have banded forelegs.  Some species are fond of sipping moisture and minerals from damp soil, others may feed on carrion, dung or rotting fruit.  Many are commonly seen nectaring or basking in sunny areas.  Basking occurs with wings fully to partially open, or with the butterfly laterally positioned to the sun with wings folded over the back.  Hairstreaks (including elfins) and blues rub their hind wings together when at rest, a strategy thought to divert predatory attention away from more vulnerable body parts.  Both adult and larval diets vary widely.   Several species have multiple generations per year and most are locally distributed.

The mainly brown and inconspicuous elfins, found in or near dry forest openings, open coniferous forests and/or bogs, are most active in May.  During the survey period, Hoary Elfins were found in more locations than the superficially similar Brown Elfin, and in much greater numbers; this may be partly the result of the affinity of the Brown Elfin for wetter, largely inaccessible habitats.  Both of these species are dependent on heath plants as larvae and thus are often seen together as adults.  The rarely encountered Henry's Elfin has stubby tails on the hind wing margins but can be mistaken for the former two species, particularly when worn; larvae reportedly feed on blueberry.  The Eastern and Western Pine Elfins bear complex ventral wing patterns, unlike their more plainly attired relatives.  The Eastern Pine Elfin can be fairly common in the study region, where their larvae feed on young pine needles.  Its western counterpart was not detected (existing records are from northern regions).  The abundance of these species was shown to vary markedly from season to season but this may be due in part to sampling efforts.

Above:The Hoary Elfin gets its common name from the whitish scales along the margins of the ventral fore and hind wings.  Mars Sand Hills, 5 May, 2011.  Photo by Deanna Dodgson

The uniquely patterned Harvester is found near forested streams or rivers, often near alders.  Its larvae feed on insects (woolly aphids), making this our only carnivorous butterfly caterpillar.  In Manitoba, the spring population is more robust than the summer one, and it is most often seen in late May to mid-June.

Above: Harvesters are most often seen while puddling.  Brightstone Provincial Forest, 18 May, 2016.  Photo by Deanna Dodgson

Various blues, so named for the metallic blue scales on the dorsal surface of the males' wings (females are generally brown above), fly from very early in the spring until the autumn.  Blues are distinctively marked on the undersides, with dark spots on a whitish background, and sometimes also with orange spots or bands along the wing margins; two species sport hind wing tails.  Caterpillars of most species are legume feeders.  May is the peak flight period of the Spring Azure, one of the most numerous and widespread butterflies in our region.  Of all blues, the Spring Azure has the most varied larval diet, including dogwood, blueberry and wild cherry (especially the flower buds).  This butterfly is part of a species complex (along with the Summer Azure which is much less numerous in Manitoba and has a later flight period) whose taxonomic status is uncertain.  We chose to combine total sightings of these two species.  The main Silvery Blue flight is in the first half of June, when it is readily found in various habitats.  Eastern and Western Tailed Blues, difficult at times to identify to species, have two or more generations per season.  Western Tailed Blues appeared to be more numerous in the southeast, appearing in early May and peaking by mid-June (peak season for ETB is in July).  Melissa and Northern Blues, which also present identification challenges, make their main appearances in June and July respectively, the former in dry prairie habitats and the latter in boreal areas where heaths abound.   Once numerous in southern Manitoba, Greenish Blues were observed in small numbers (records in early June); this species appears to be much more common in northern areas such as Thompson.  No Arctic Blues were found during our study, though there are historic records for the Winnipeg area. 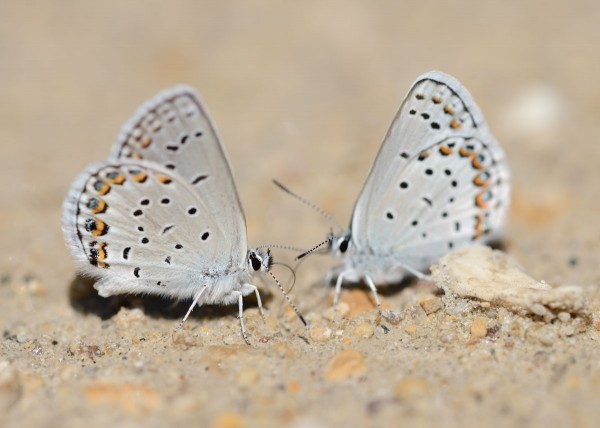 Mid to late July is the optimum time to see coppers, most males of which have iridescent purple dorsal wing surfaces.  The Dorcas and Bog Coppers favour peatland areas where their foodplants are found (shrubby cinquefoil and Vaccinium cranberries, respectively).  A small group of observers were delighted when Peter Taylor found the lone Bog Copper in the Milner Ridge area.  The larger Gray and Bronze Coppers bear a strong resemblance to each other and are both found near sloughs, ditches and in marshy areas; docks are larval hosts for both species, with the latter also reported on knotweed.  Only one Gray Copper was reported during the survey period, in a Winnipeg yard, but the species is likely more common than this fact suggests.  Of the five Copper species found in southeastern Manitoba, the Purplish Copper is the only one with two generations per year, with numbers peaking in late July, and again more modestly in late August.  This species wanders widely in search of nectar sources and may be found in open areas well into the autumn.  Caterpillars feed on various dock and knotweed species.

Above:The dorsal wing pattern is the best way to differentiate the Dorcas and Purplish Coppers, who otherwise look nearly identical; the habitat in which the butterfly was seen and host plant presence will also provide clues as to the butterfly's identity.  This Dorcas Copper was seen in Whiteshell Provincial Forest, 2 August, 2009.  Photo by Deanna Dodgson

Best observed while nectaring, Hairstreaks are most common in mid to late July.  The name Hairstreak refers to the filamentous tails found on the hind wing margins of numerous species within this subfamily.  Fond of wet areas where shrubby willows grow, Acadian Hairstreaks were rarely reported during our survey.  Small populations may have escaped detection, however, as adults often remain in vegetation.  The Banded and Edwards' Hairstreaks live in dry areas with stands of bur oak.  Edwards' Hairstreaks were recorded less often than the former species, perhaps because of their sedentary nature and a penchant for perching out of sight on host trees.  The Striped and Coral Hairstreaks were recorded more often than their cousins.  Larvae of the Striped Hairstreak feed on plants in multiple families; not surprisingly, Striped Hairstreak was the most commonly encountered species, even found in large urban centers such as Winnipeg.  The tailless Coral Hairstreak can sometimes be seen in small groups, particularly at favoured nectar sources, in moist or dry, sandy habitats where their food plants are present (wild plums and cherries).  The Gray Hairstreak, a vagrant to Manitoba, was found on two occasions, once by Peter Taylor near Pinawa, and the other by Jason Gibbs in Winnipeg.